In this article, we will introduce you to a method of Capitalization Of Profits on the basis of a modest average gain of 4 units per attack.

The bet size is increased about $ 100 after each profit of $2000. Amounts which cannot be divided accordingly are being used to build a reserve.

The following table should make the capitalization clear

So within twenty attacks, each gaining 4 units, the starting bankroll of $2,000 has been increased to $41,000, obtaining a total profit of $39,000! In the process of this capitalization, $ 8000 for the formation of a reserve was pulled out.

The principle of this procedure consists of increasing the size of units if gains of the amount of the starting bankroll were obtained and those gains distributed on the 20 starting units. Thus these are doubled, tripled etc., whereby the amounts which can not be divided are pulled out and used as a reserve.

This reserve is to protect the starting capital for the little probable case in which one should lose the capitalized money with one of the last eight attacks.

If you terminate this first undertaking with a modest capital of $ 2000, you can try a second attempt with a starting bankroll of $ 8000 (reserve of attempt 1), which must be divided into 20 units of $ 400. The values of the above table then have to be multiplied by four. The last won bets reach then a size of $ 6000 and a total gain of $ 156000 is achieved.

This capitalization is based on an average gain of 5 units per attack:

Every time a gain of 5 units is obtained -meaning always the end of an attack- these 5 units are added to the bankroll which is then divided by 50 to determine the new size of the 50 units.

At the beginning of this capitalization, this will only be possible after several attacks.

Exactly the same applies after a lost attack. If a loss of 5 units develops, this loss is then subtracted from the available bankroll. This bankroll is then divided by 50, in order to determine the size of the new 50 units.

By this principle -gains increase the bankroll, losses reduce the bankroll- the player always has a capital of 50 units available at the beginning of a new attack. This procedure gives the player the necessary strength to overcome difficult stretches in his play. This is very important because it is simply utopian to believe in the possibility of a regular daily gain.

There will be losses which must be accepted. But these losses mean nothing else than a momentary idling in the capitalization. After a gain, the bankroll grows again and the unit size is gradually increased. 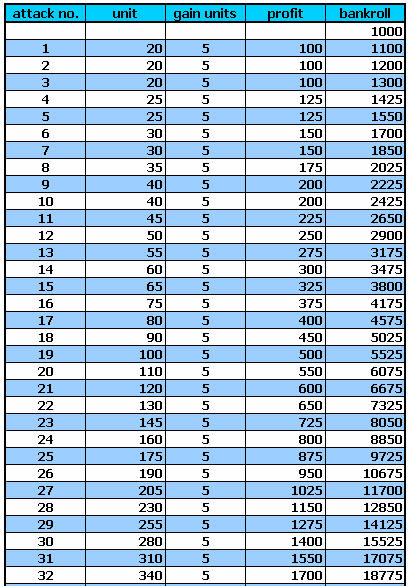 If the bankroll reaches a certain height, the reasonable player will stop his capitalization, take off a part of the obtained gains and will then begin a new capitalization with a bankroll two or three times the amount of his original capital. The player is strengthened by this procedure because he operates in the following exclusively with the bank’s money!

We have over 45 of the most popular betting systems, however, we don’t normally recommend using them. We have added them at the request of our visitors. You may want to look into the Martingale Famous Progressions system, Fast Double Bet system and the Flat Bet Counting system. It’s up to you to decide which one resonates with you the best.