Charles Guetting was a French mathematician who apparently got rich at Monte Carlo years ago using this.

Well…we haven’t gotten rich using it but have not done too badly either.

And since we started using it we have kissed the Martingale system, Labouchere Cancellation system and the Alexembert system goodbye.

Being a REAL mathematician, Guetting did his sums and concluded that if we’re going to increment progressively, first we have to get some fire under our ass, and then keep burning. But if the fire goes out, we’ve got enough wood to stay warm.

Here’s how it works. First off, digest the following table and then forget it:

But what is 1.5 of a unit?
Good question and you must have taken Greek literature at college if you’re asking.

Ok, say you have beans and don’t want to cut any in half…how do you get 1.5 of any value of beans?

Basically, we’ve doubled Guetting’ s original table values above to get playable and understandable numbers for us simple folk.

To simplify your calculator finger work, here’s the resulting table in the logical uncut bean units:

We suggest you write this down in any way that you can associate with it and remember it at the real table.
If you smoke, write it on the back of your cigarette box.
If you don’t smoke – pretend you do.

The levels might be considered as gears.
If you progress in Level 2 from 3 mph to 4 mph and then to 6 mph, you change gears up to Level 3 and go to 8 mph…. etc.

The mechanism:
This system is applied to even outside bets and we’ll take red and black as our primary example.

If you’re betting a unit at any level for the first time and lose, you go back to jail and to the first unit in the previous level.

If you’ve won on one unit at any level the first time but lose on the second bet on that same unit – you repeat the bet starting again from that same unit since one win is canceled by a loss of the same bet.

If you keep losing, keep betting two units. FOREVER.
Or until the ambulance arrives.

This means if you lose 10 times in a row on red, you have only bet 2 chips every time and lost 20 units.

This is what makes the system affordable but wait till you add our ‘Jump the Tram’ variant.

You’ve now won in 8 consecutive spins and have gained 30 units.

If you are not familiar with this system we recommend that you start with part 1.

As you very well know, a progression in itself never can produce a superiority in general over the wheel, even if it is finely constructed. It can never change a negative expectancy game into a profitable one in the long term. There may be some exceptions necessitating a very high bankroll, but therefore these are not usable for the majority of players.

Charles Guetting played exclusively Trente-et-Quarante, however, his progression might as well be applied to even money bets on roulette.

The Guetting Progression is a four-stage gain progression: 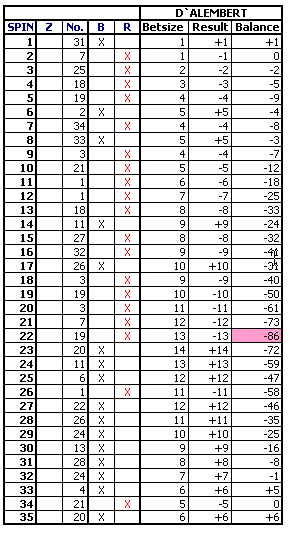 After two consecutive won bets in one stage, the progression moves on to the next higher unit bet in that stage: 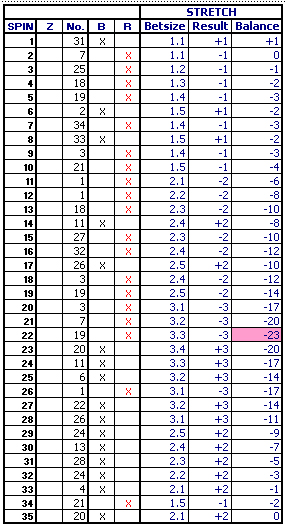 After the loss of a bet, the Guetting Progression steps down to the first unit size in the next lower stage, therefore down to 4, 1.5, or 1, depending, on which stage the bet was lost.

This loss can occur:
1.) if immediately after two consecutive won bets the next higher bet is lost
2.) if 2 consecutive losses appear. 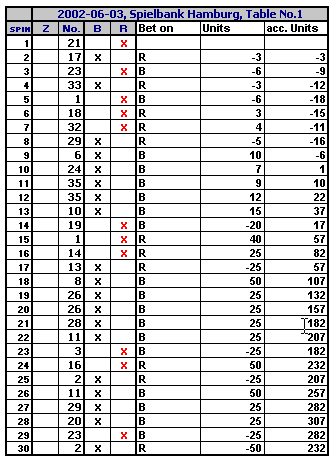 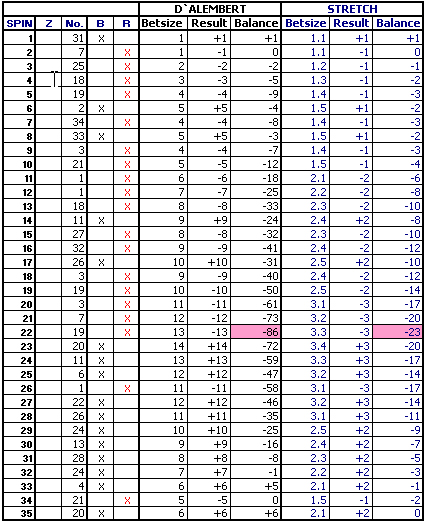 In the next table we will compare flat betting and three well known progressions ( the Martingale system, the d´Alembert system and the Contra D’Alembert ) with the Guetting Progression: 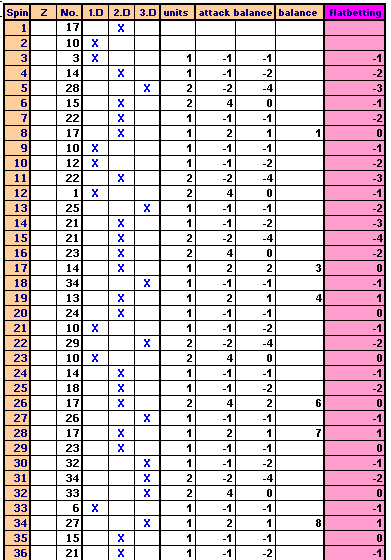 Whittacker Progression for Even Money Bets

Oscar Grind vs Another Betting System