In many countries, such as the UK, Australia, and the US, horse racing is hugely popular.

There are many horse races around the world each week with a huge variety of horses, and jockeys to bet on. The flat race is by far the most popular race where horses sprint against each other to the finish. The jump race is another popular form of racing that requires horses to jump over ditches and fences.

Below are the types of horse races we will focus on in this article:

The most popular form of horse racing is Flat Racing and is practiced worldwide. The Thoroughbred, known for its endurance is bred and used for this type of racing. The most well-known Flat Races in the world include the Kentucky Derby, Japan Cup, Epson Derby, Dubai World Cup, and the Melbourne Cup, which are televised worldwide.

The track always has a flat-level surface made of turf in Europe and dirt in North America and Asia. Synthetic materials such as Polytrack are also becoming popular.

The most common distance for the Flat Race is between five and twelve furlongs but can be up to two and a half miles (4 km), depending upon the race.

Stake Races are the highest level horse races one can be a part of with very high payouts. The Saudi Cup paid out $30.5 million in 2022, while the Kentucky Derby Triple Crown paid out $3 million in May 2022.

These races are reserved for the most well-known horses, and jockeys in the industry, that have greatly proven themselves over the years. The Thoroughbred is bred for this type of racing, while the Flat Race type is used. 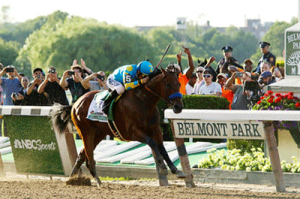 The National Hunt is a race popular in the United Kingdom, France and Ireland. The horses bred for this type of racing are usually The Thoroughbred mixed with Dutch Warm Blood, French-bred jumpers, and or a combination of different breeds and Origen can be used.

The horses have to jump over many hurdles and or fences with the distance being 2 miles and upwards. The 2 types of Jump Racing include Hurdle racing with many obstacles and Steeplechase racing, which includes fences, open water, and or ditches. 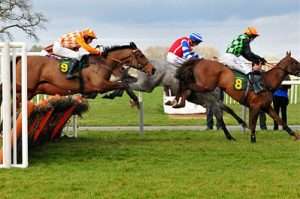 Harness Races are a very unique sport in which the horse must stay at a trot or pace, without ever breaking stride. If they break into a canter or gallop they must be pulled back to the trot which can make them lose ground to their competitors. The horse pulls a 2-wheeled cart called a sulky or chariot which is occupied by the driver.

The horse breed for this type of racing varies between countries, but one distinct feature in each breed is a shorter leg and longer body. In North America, it is always the Standardbred but in Europe, the French Trotters or Russian Trotters are used. In Russia, the Orlov Trotters are preferred, while in Norway, Sweden, and France you will find the Coldblood trotters and Finnhorses.

The richest Standardbred known to date retired in 2019 called ‘Foiled Again’, winning an estimated $7,635,588 USD throughout his career. 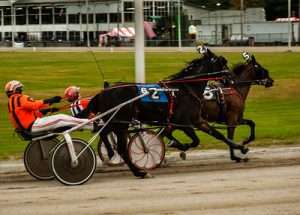 The Quarter Horse race is a quarter of a mile long, lasting approx 22 seconds. It runs on a straight dirt track, without any turns. The horse bred for this type of race is the American Quarter Horse. The Quarter Horse can outrun even the Thoroughbred at short distances because of their muscular hind limbs but aren’t well suited as endurance horses.

The All-American Futurity Race is held every Labor Day weekend at Ruidoso Downs with a 3 million dollars purse. The fastest 2-year-old Quarter Horse colt in history to date is ‘Eyesa Special’ with a record speed of 21.097 seconds, winning a 1 Million Dollars prize from the purse. 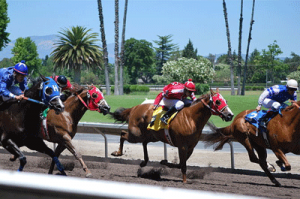 A claiming race is a race where all the horses are for sale at their specified entered price until the race begins. Before the start of the race, the title is transferred to the new owner if sold, but the purse goes to the former owner if they win. Anyone licensed to own racehorses may claim a horse. Most of the racetracks in the USA hold claiming races.

Most claimed horses don’t normally go on to win anything substantial but one claimed horse ‘Stymie’ did and went on to win 900,000 USD throughout his career. Another horse ‘Maximum Security’ wasn’t claimed but went on to run in the 2019 Kentucky Derby, but was disqualified for interference with other horses, after he was initially thought to be the winner.

An Allowance race is a race where the horse is given weights attached to its saddle to even out the odds of winning. These races are also called conditioned races. If the horse is at a disadvantage it will likely carry less weight. An example of a horse given less weight is if they are younger, has an inexperienced jockey, or is female(Filly). An example of a horse getting more weight would be if they have proven itself, they have an experienced jockey, or is male(Stallion).

Both the Oaks and the Epsom Derby are handicap races and examples of races where the horses carry weights. The Thoroughbred horse is used in both the Allowance and Claiming races.

Each race will have conditions attached such as the Grand National week in Aintree, UK. This race is called The Liverpool Hurdle race and is 4,964 meters long, contains 13 hurdles, and is for horses 4 years and older. The mares and Fillies get a 7 pounds allowance, while the 4-year-olds get 13 pounds and 10 stones of weight and the 5 years olds will carry an additional 8 pounds on top of that. 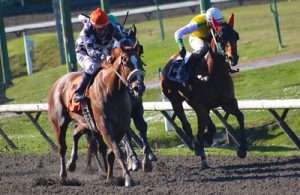 Horses are referred to as Maidens if they haven’t won a race. These races are considered entry-level races and can consist of set weights, weight for age, and or handicaps. In the USA Maiden races rank above the Claiming race but in some races, the Maiden horse can be claimed.

A horse will be considered a Maiden if they haven’t won a race for example in Flat racing, but their status would change if they entered a Jump race, in which they have had a prior win. Some Maiden horses have become famous and have done well for themselves even without any wins. An example is ‘Zippy Chippy’ who had 100 starts with zero wins but still managed to place several times with $30,000 in prize money won throughout his career. Another is ‘Vote For Lust’ who had placed 10 times throughout his 86-time start career, winning $20,000 in prize money. 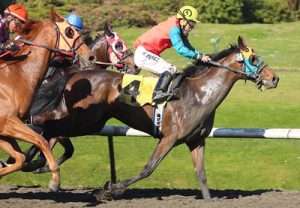 Horse Racing differs from many other sports when it comes to betting such as soccer due to a large number of competitors in each race.

In horse racing, there are often 10 or more horses racing who could potentially win meaning very different strategies are needed.

Every day you are likely to find a number of races to bet on –and we outline the most popular types of horse racing bets here.

Most newspapers and many websites that promote a race meeting will give information on the form of each horse in their previous few races. Taking this into account, as well as the expected weather. Some horses do better on dry ground when there is no rain than on wet ground when rain is expected for example. Also, the length of the course – like human runners, stamina comes into effect as not every race is over the same length – and the jockey for each horse (if the jockey and horse have worked together before they may have an advantage over a combination that haven’t.

You should also check if there are any known injuries the horse may have that could hamper the outcome. Or falls the jockey has had that could affect their confidence and the experience the horse has had in recent times.

Don’t always go for the favorite

Yes, there will be a reason that a horse starts at lower odds than others, but that shouldn’t be the be-all and end-all when you come to choosing which to bet on. Very rarely will you see a meeting of 5/6 races where the favorite wins every race. The larger the field, the less likely it is the favorite will win as all it takes is for them to get blocked off by another horse at a crucial time. Or a horse to land near to them in a jump race, and the dangers involved in such a race and the ability of a jockey to navigate out of such a situation.

Large fields can be more profitable

Like any betting event, the more participants the better the odds for some. Even when you are betting on a horse to be placed, for example, having 4 or 5 more horses can make a big difference to starting odds when compared to a smaller field.

Shop around when you decide where to place your bets

There are a large number of betting sites that focus more on horse racing than others. These can often pay out more horses in specific races than other sites or offer enhanced odds on some horses. Horse Racing is the sport more than any other where it really does pay to shop around before placing a bet, especially as some will offer boosts on specific races as well.

The History of Horse Betting

Horse Racing itself dates back to around 4,500 BC as a popular sport amongst Central Asian tribesmen who are believed to have had the first documented domestic horses.

Since then, it has become one of the most bet-on sports in the world, especially around some of the most popular meetings such as Cheltenham. The biggest races like the Grand National and The Derby attract horses from all over the world and mega prize money for the winning owners and jockeys.

Bet within your means

This applies to any sport you bet on, if the enjoyment stops then it may be time to stop betting. If your horse gets beaten right at the end of a race by a nose and the difference between winning and losing the bet has an adverse effect on your health, there are numerous organizations from where you can get help depending on where you live.

How to Play Gin Rummy